All about snowboarding, surfing and skiing and more

Last week I recounted how my mate Phil, was in the middle of a 3 month trip snowboarding in France (taking a rest from surfing) travelling in his homemade camper van and how he was lucky enough to stumble upon the Unofficial British Ski Jumping Championships on the 1st February organised and participated in by our super hero, Eddie "The Eagle" Edwards. I promised to post some more photos of the event, featuring Eddie, as soon as Phil emailed them to me and here they are:


I expect that you have all been hearing ad nauseam about the EU referendum.  Over the next few months we will all be fed the usual half truth and downright lies about what is good for us, the wage-slave majority, like the rich tax dodgers have always done.  What they won’t tell us is what is really good for the Tories and their super-rich mates of course.  Another aspect which will probably be overlooked is the effect that leaving the EU will have on our freedom to travel in Europe. As surfers and snowboarders we have all be used to decades of chucking the surfboards or snowboards in the van and heading for the continent and, if we need to, getting work or receiving health care when we break a leg.  It’s not only surfing that will be affected if we leave the EU, it will be the good old British cheap continental holiday.  That of course will not affect our millionaire and billionaire Tory masters who can pop over on their yachts to see their super-rich mates.

Flying Like an Eagle
One of my mates Phil, lucky sod, is in the middle of a 3 month trip snowboarding in France travelling in his homemade camper van while I'm slaving over a hot website. Not hot in the illegal sense of course! He sends me regular updates on his progress and disasters a snippet of which I intend to bore you with now.
On the 1st February he was at Courchevel Le Prazthere and he heard that there was going to be a cancer research fundraising event at a small satellite resort which was just down the road. When he went down to investigate he discovered it was going to be the Unofficial British Ski Jumping Championships, organised and participated in by none other than our National Treasure and super hero, Eddie "The Eagle" Edwards. In my humble opinion he embodies everything that is good about our indomitable "British Bulldog Spirit", something we are in grave danger, as a nation, of losing because of culture destruction. The man is a true legend. He competed in the 1988 winter Olympics in Calgary and he wasn’t young then, so according to my mate Phil, seeing him throw himself off a 90metre "tremplin" was an event not to be missed. Here's a photo of Eddie at the Championships on the 1st February: 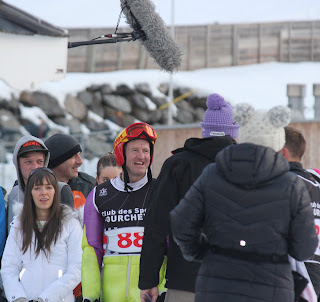 I've asked Phil to email me some action photos of Eddie from the completion which I will be sharing with you in a latter blog.
Whilst Phil has been away I have done a revamp on the british surfing company website and created an exciting new look.  There are some more changes afoot which I will tell you about in a later blog.  To celebrate my hard work I am offering a 10% discount to my readers off any purchases from my website using code  PREVIEW GIFT.  The discount applies to Men's T-Shirts, Women's Tops, Men's Hoodies and Jumpers and Women's Hoodies and Jumpers.
See you later
Allan